Its purpose is to maximize the work of the United Nations so that the system can provide a collective, coherent and integrated response to national priorities and needs, within the framework of the Sustainable Development Goals.

The overall framework for the coordination of the UN operational activities at the country level is the Common Country Analysis (CCA) and the United Nations Sustainable Development Cooperation Framework (UNSDCF), an overarching strategy framework for all the UN entities working in the country that is framed around the Sustainable Development Goals (SDGs) and is in line with the national priorities.

The UN Resident Coordinator Office (RCO) fulfills five key functions in support of the responsibilities of the RC and the UN Country Team (UNCT):

The UN Resident Coordinator in Armenia

Mr. Shombi Sharp of the United States was appointed by the UN Secretary-General as the UN Resident Coordinator in Armenia on March 1, 2018. He has devoted the past 25 years to promoting inclusive and sustainable development internationally.

Prior to taking up his appointment in Armenia, Mr. Sharp served in a number of capacities in various parts of the world, including Southern Africa, New York, Eastern Europe, Central Asia, the Middle East and the South Caucasus. He is both a published author of works in the health economics field and a seasoned manager of technical assistance portfolios at the country and regional levels, with graduate training in economics and public health management. Mr. Sharp has also served in a number of advisory positions, including as member of the World Health Organization Knowledge Hub Advisory Board, and as a World Bank Expert Panel member for Europe and Central Asia. He was designated a USAID “Policy Champion” and nominated for the UNDP Administrator’s Award, while having also served as a guest speaker at numerous international fora, including the European Health Forum, Central European University, the Council on Foreign Relations, the Goldman Sachs Global Leaders Program, and the Social Science Research Council in NY, USA.

Within the UN, Mr. Sharp has previously served as UNDP Deputy Resident Representative in Georgia (2014-2018), UNDP Deputy Country Director in Lebanon (2010-2014), UNDP Europe and CIS Regional HIV/AIDS Practice Team Leader based out of Moscow, Russia (2006-2010), UNDP Programme Manager for the Western Balkans based out of New York (2005-2006) and UNDP Assistant Resident Representative in Russia (2002-2005). He began his career in development first as a Volunteer and then Strategic Planner, Project Manager and Crisis Response Coordinator with CARE International in Zimbabwe (1997-2000), prior to which Mr. Sharp worked in the private sector.

Mr. Sharp speaks English (native), Russian (fluent) and French (intermediate), and holds a master’s degree in Economics and bachelor’s degree in Business Administration, along with other educational attainments. 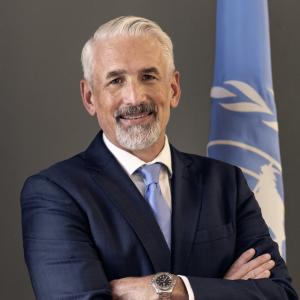